Several months ago my brothers and I had an idea, that idea was to send a rocket into the upper atmosphere using a weather balloon. Once the balloon reached it’s maximum height, the rocket would ignite, cutting the balloon string and eject the parachute after the rocket finished burning. If you think this sounds fun and interesting, you are right. However, if you think this sounds expensive, you are only partially correct. 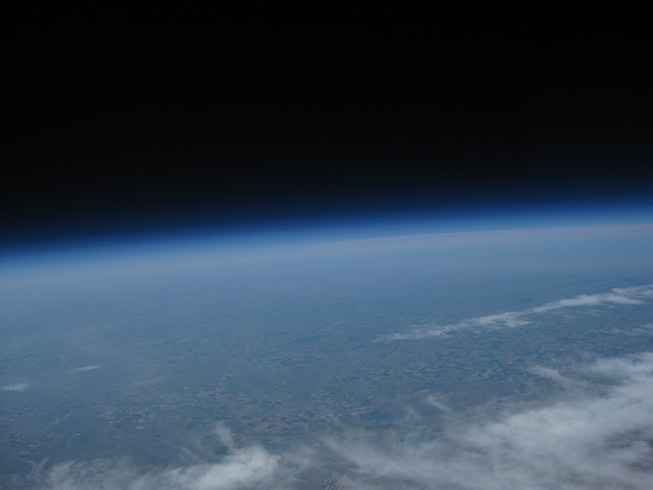 The Modern world of Engineering

Total cost of the project was approximately 230.00 US Dollars.
This is an epic time for an electrical engineer to be alive. With the help of my brothers, and friends we were able to build an aircraft that went up to ~120,000 feet and fell back to earth while transmitting data back to us on the ground.

All this was done in accordance with all FCC and FAA guidelines (i.e. it was a legal project). Even 10 years ago this would have been a near impossible task to do on a budget. However, in the past three to four years there have been 10’s of people that have done this sort of project and shared it with the world.

We actually launched two different balloons, the first balloon we tracked to 63,000 feet at which time the GPS cut out due to DOD regulations [1]. The regulations are actually set to 11 miles (58,000 feet), so we are a little unsure why it cut out at 63,000 but it did.

We were not prepared for the GPS data to cut out in this way (poor research on our behalf). Being our ignorant and excited selves we decided to drive to the last received location. From there, we tried to reacquire the flight craft signal. This was a terrible idea as it took over an hour to drive to the last received coordinates. Once we arrived there we attempted to reacquire the signal again, but failed, most likely due to the earth’s curvature blocking the line of sight needed to receive the radio signal. We were unable to locate and retrieve this first balloon.

The second launch took place one week later, that is correct, we rebuilt the entire system in 1 week.

The payload of the second balloon can be seen in Figure 2. 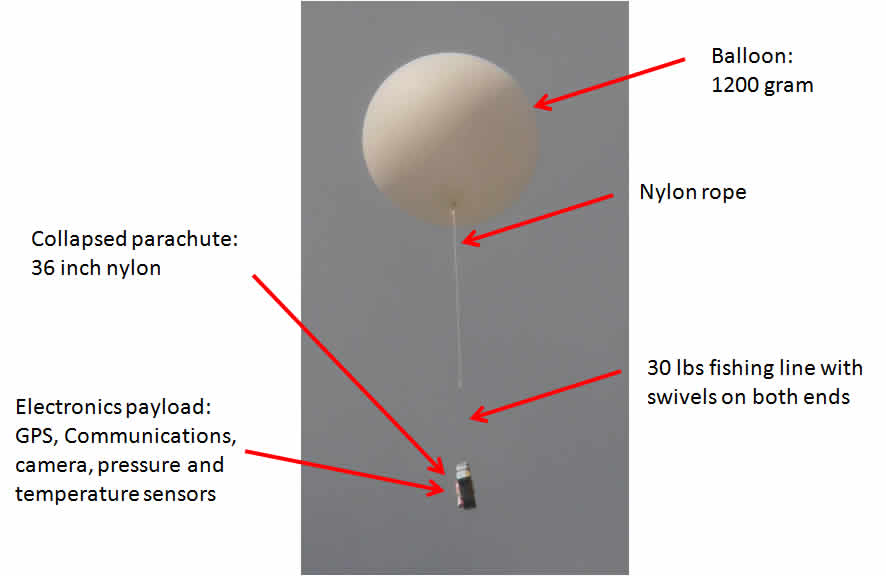 During the flight the balloon flew a total of 104miles, all our predictions told us the balloon would travel between 60-70 miles on that particular day [2][3].

In order to build this system special care had to be taken when choosing the components that were used.

The Flight craft
The flight craft was built entirely out of insulating foam and Gorilla Glue (yes this stuff even works in outer space). The foam was put through our CNC machine so that each integrated component would fit snugly into the flight craft. 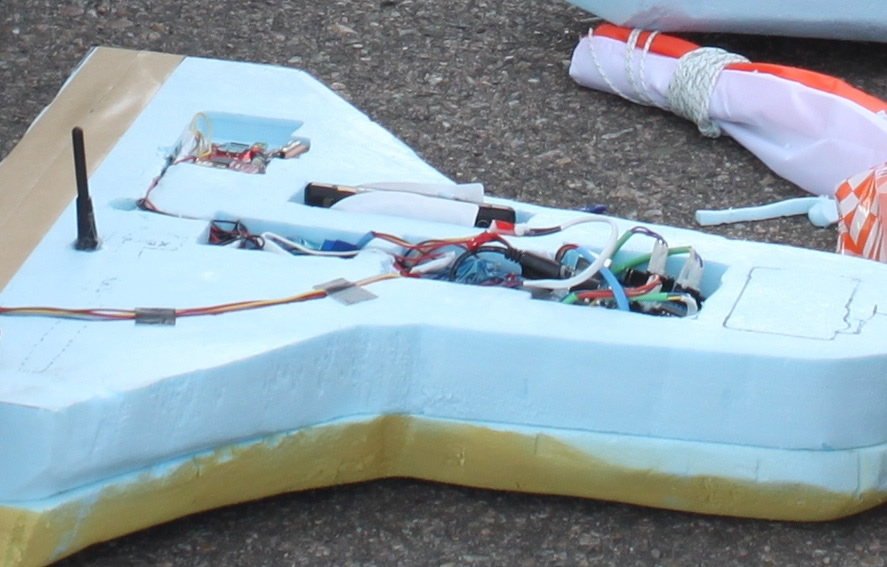 Figure 3: CNC Machine was used on the foam so that each component would fit snugly within the flight craft.

Warming
The flight craft was built from insulating foam in order to protect all the electronics from freezing at high altitudes. Temperatures above 50,000 feet can easily reach -50° C, most of our equipment was rated to -20° C. However, we calculated the components would not remain above their rated temperature with the foam alone. In order to keep everything heated, chemical hand warmers (like the ones you take skiing) were used to heat each component during the flight.

Camera
During this flight we used a modified Canon camera. Due to the extreme temperatures (as discussed above), the majority of the camera was left inside the insulated body of the flight craft. A hole was made so that the camera lens was not obscured. 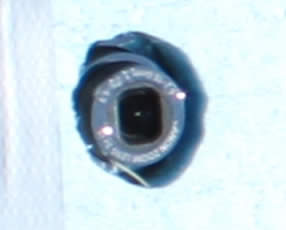 Most Canon cameras are set up in a way where the software can be hacked so that the camera can be programmed using UBasic scripting / programming language [4]. I truly believe this feature alone creates a lot of business for Canon. We used this feature to program the camera to do all the functions we needed it to do; the programming also allowed us to optimize the camera for our particular flight. Battery lifetime, picture quality, picture speed, resolution, and auto focus were all optimized for our flight.

The Processor
An Arduino processor was used for the majority of the signal processing and data recording. The processor measured GPS, temperature (x3), and pressure, and recorded everything to an SD card for safe storage. 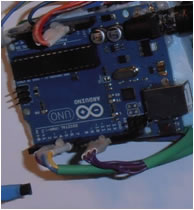 Each ground terminal system was outfitted with an extremely low noise LNA in order to reduce the signal to noise ratio (SNR). The ground terminals were programmed to be receive only terminals, this main reason for this was to keep the system within FCC guidelines. The FCC states that systems, such as this not, that operate within the 2.4GHz ISM band, are not allowed to exceed a maximum equivalent isotropically radiated power (EIRP) [5]. In order to stay within these limits the system was required to be receive only at the ground terminals. This is because only the ground terminals had high antenna gain. The transmitters on the flight craft used a 3dB whip antenna, this allowed for the broadest beam possible while still maintaining the antenna gain needed to maintain the system link budget. If needed the system could have stayed within the limits of the FCC using a 30dBi antenna [5].

I will let the pictures speak for them selves. 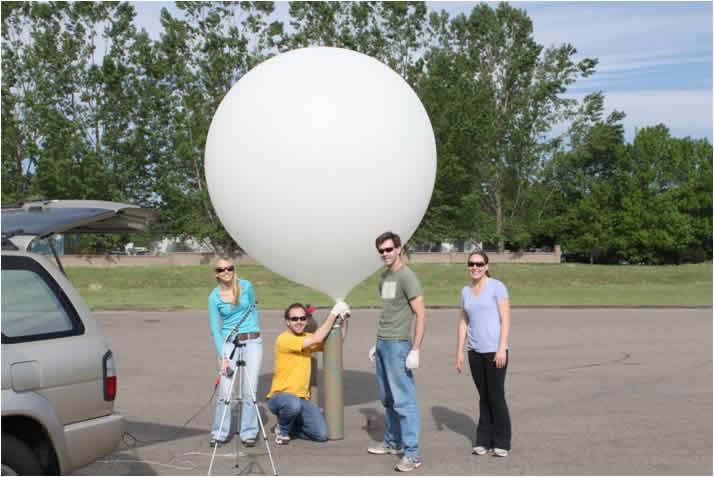 Figure 7: Filling of The Balloon 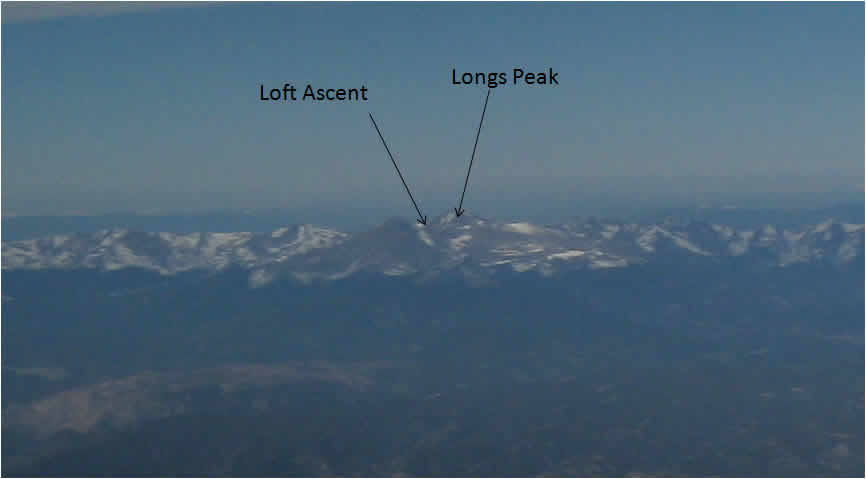 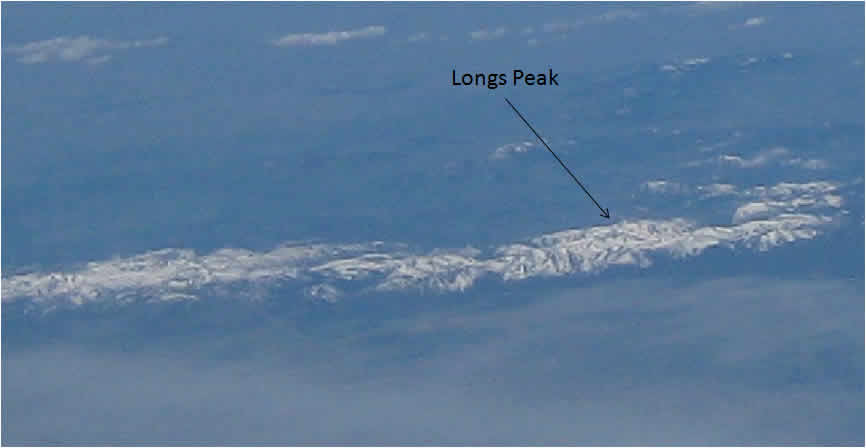 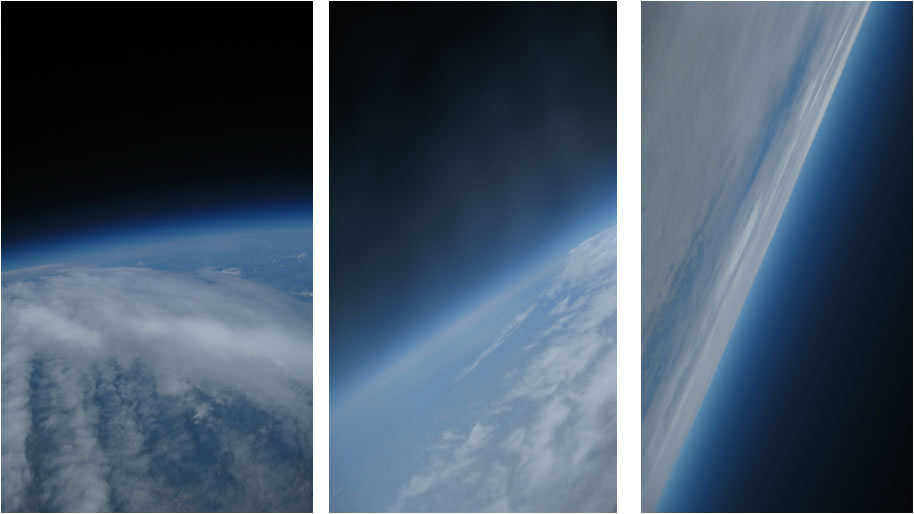 Figure 10: Images of the edge of space 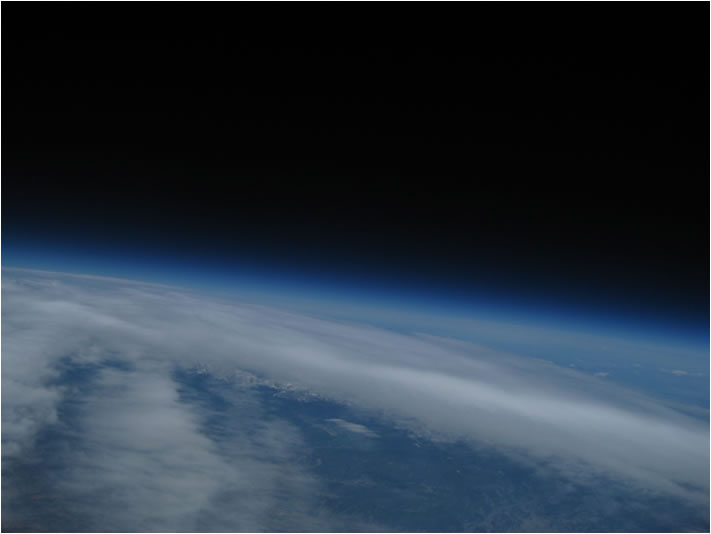 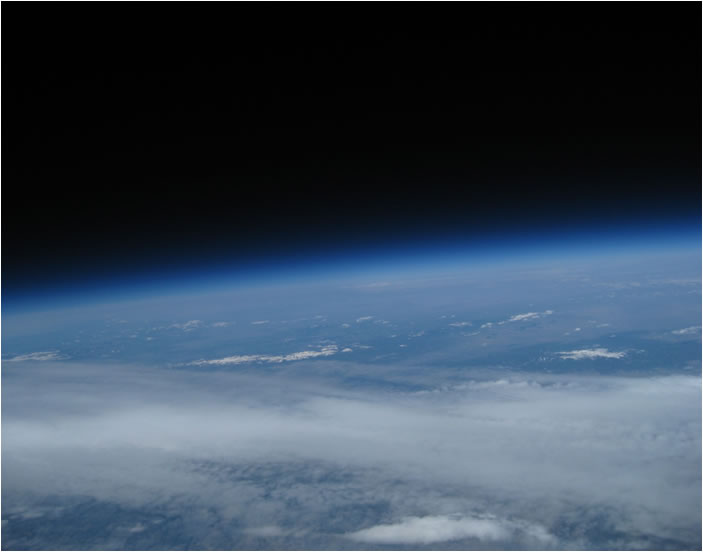 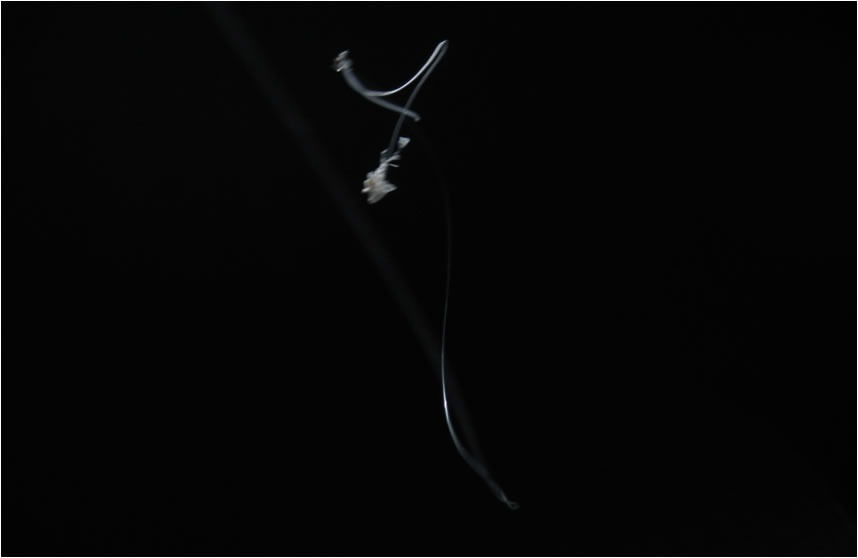 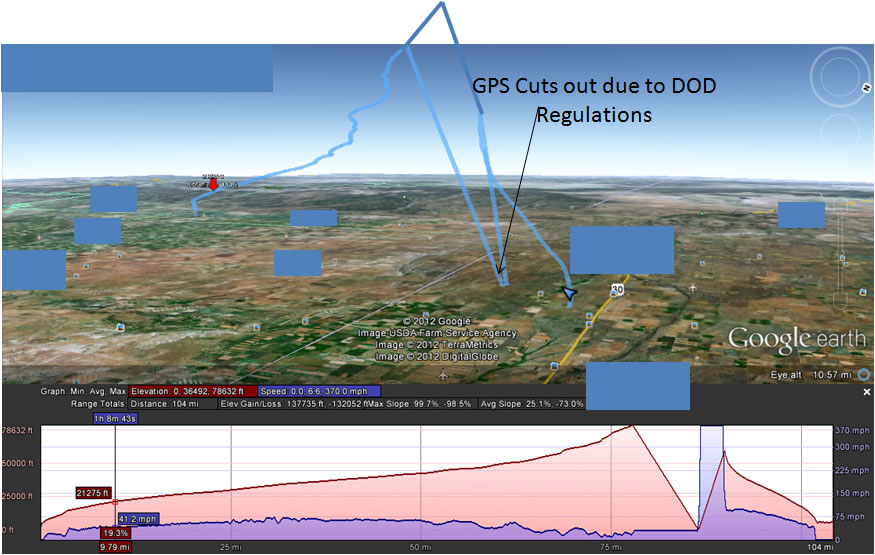 While there were several hiccups along the way, and no records were beat (1972 current record of 170,000 feet [6]), overall the project was a huge success! It took a lot of thought, planning, and some insight; but the actual implementation of it, while time consuming, was quite straightforward.

Edit: Just a few months after we did this Felix Baumgartner set the world record for skydiving, and he used a balloon to reach the altitude he jumped from. His balloon made it a little higher than ours at an estimated 24 miles. After he jumped he was able to reach a speed of about 1357.64 km/h (843.6 mph), or Mach 1.25.[7]