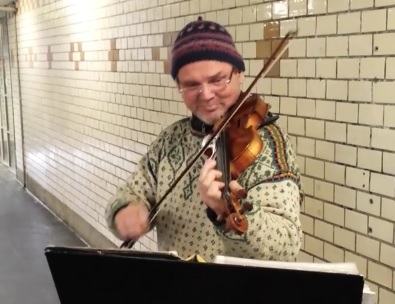 I recently was in Sweden and ran into a wonderful street performer named Pare that played the violin in a small town train station. The first song I heard him play was exceptional.  I decided to talk with him for a while and get to know him.  This is not something that I usually do but after this experience I believe I will start to make a habit of striking up a conversation with different people.

Pare had an exceptional story to tell me and he was not hesitant to include many personal aspects of his life to me. Pare went to a school to study the violin and worked in small symphonies for a while after he graduated. After a few years of working in these small symphony orchestras Pare was hired into The Royal Stockholm Philharmonic Orchestra. Pare made a good salary but was working 5 to 7 days a week, long hours and began disliking playing his violin.  Pare began feeling more like it was a chore to play his instrument than an enjoyment. After a few years at The Royal Stockholm Philharmonic Orchestra Pare decided to quit and work for himself. There were many Orchestra’s around the world where Pare could pick up side jobs taking over for a day or a week to cover for people who were ill or on travel. He began to play on the street when side jobs were not available and realized that he could play whatever he wanted, where ever he wanted, for however long he wanted, and people would still pay him for his efforts.

Pare traveled around Europe for a while living off local jobs and street performances. He was enjoying life and getting to see Europe doing what he loved. Pare told me many stories of people he had met from CEO’s to homeless and all the interesting people he had talked to over the years.

After traveling for some years Pare decided to come back to Sweden a buy a home.  While he now collects pension he still performs in Lund and Malmö and often still subs in in the Malmö orchestra.  He does this only because he loves to play and loves meeting people.

His performance just for me

Pare tries to play a different variant of a song for many of the people that he meets; I asked Pare if I could record what he played for me and he welcomed it. Here is what he performed:

I think many people could learn something from Pare. Life is not about working, you must enjoy your life and not toss away the things you love for just for a little extra profit.